Did y’all know that Hainan Province formed several million years ago in the South China Sea after breaking off from what is now the northeastern coast of Vietnam? Fast forward to the mid-1800s, many people from the Chinese island province started to migrate to nearby Southeast Asia in search of more prosperous economic opportunities. When they left the island, they also brought with them one of the province’s most notable culinary exports, Hainanese chicken rice. The Hainanese immigrants forged roots throughout Southeast Asia, and their eponymous dish made a mark on essentially all of the cuisines in this region. Each of these countries has a variation of this delectable chicken and rice dish. 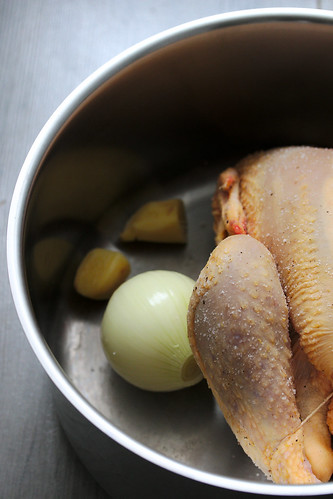 In Vietnamese cuisine, the dish is known as cơm gà hải nam. It’s such a simple dish composed of few ingredients, yet tastes exquisitely delicious. We start by gently poaching a whole chicken with ginger and onion. Once the chicken is cooked, we remove it from the broth and allow it to cool. I’ve read that some chefs dunk the chicken in ice cold water after cooking it. In doing so, a gelatinous layer forms on the surface of the chicken and the skin becomes more elastic. We then take the rich poaching broth to steam the rice. I skim off and discard all of the chicken fat that comes to the surface of the broth. But, many folks will use that fat to make the rice, which gives it a nice glossy sheen. To give the rice an even bolder flavor, I sauté the rice after steaming it with minced garlic and ginger. 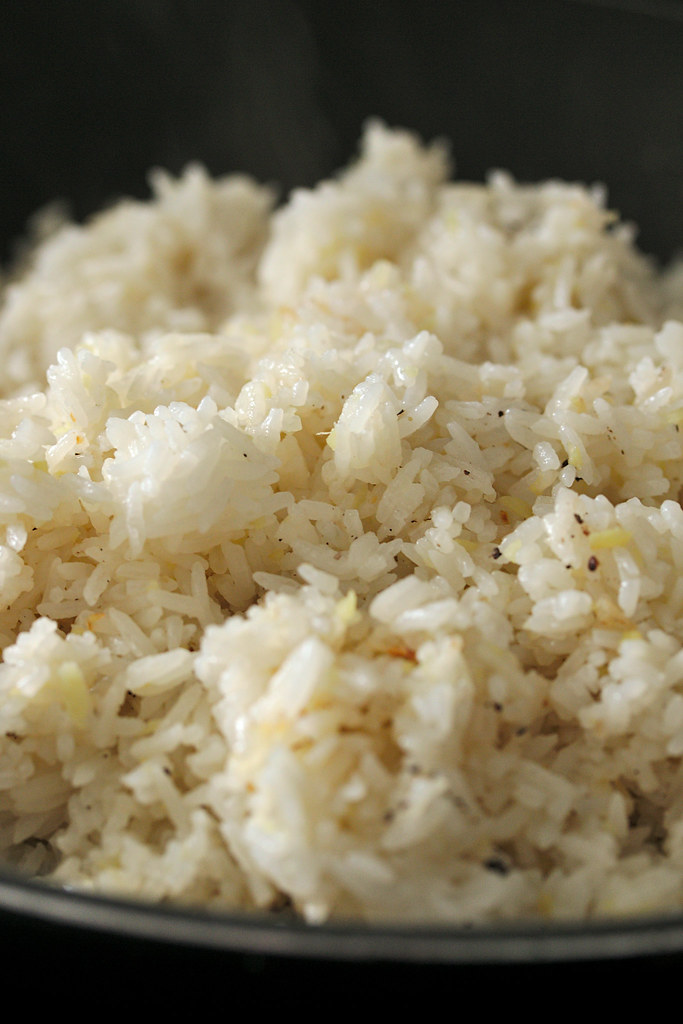 You’re probably wondering how such an ordinary sounding dish made its way into so many cuisines known for their colorful flavors and even becoming one of the national dishes of Singapore. As in French cuisine, it’s the accompanying sauce that elevates this dish from banal to finger-licking scrumptiousness. When I ate this dish at Chinese restaurants in Alhambra and Monterey Park in Southern California, they served it with several dipping sauces–chili, soy and ginger-scallion sauces. Of the three sauces, my favorite was always the ginger-scallion one, which is made of minced ginger, green scallions, oil and salt.

To be honest, I don’t know if the Vietnamese version differs much from the original Hainanese chicken rice. What my mom made at home mirrored the ones that we had at the Chinese restaurants in Southern California. Instead of three sauces though, my mom would only make the ginger-scallion dipping sauce. When I moved to France, this was one of the few dishes that I knew how to make and I, too, would only served it with the ginger-scallion sauce. 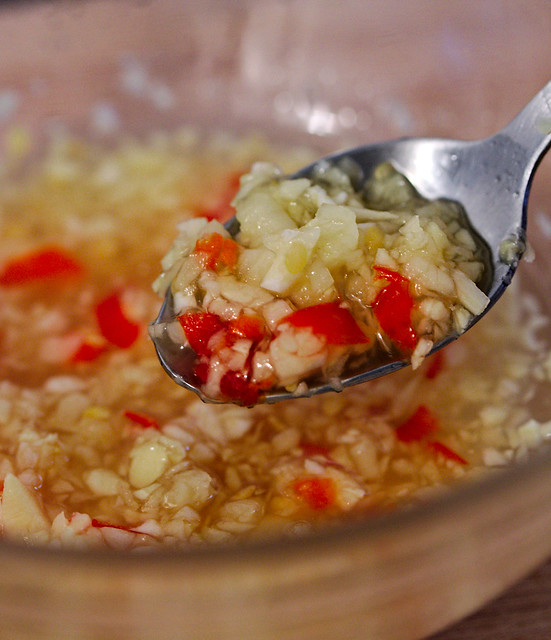 I’ve since changed up the sauce that I serve with the chicken. Instead of the oily sauce, I now prefer to dip it in a traditional Vietnamese nước mắm gừng, which is a dipping sauce composed of minced ginger, garlic, chili peppers, lime juice, sugar and fish sauce. In Vietnamese cuisine, we often serve this dipping sauce with chicken or duck congee and salads. I find our ginger sauce to be much more flavorful and adds a Vietnamese touch to the dish with the fish sauce.

In addition to the savory sauce, the key to perfecting this dish is to prepare it with a quality chicken. You want to choose one that actually tastes chickeny. I find that the best tasting chickens with higher quality meat are organic, free-range or pasture-raised, antibiotic-free and fed a purely vegetarian diet.

The great thing about making cơm gà hải nam is that nothing goes to waste. Not only is the chicken and rice a complete meal, but I can also squeeze a second dish out of it. Instead of serving the chicken and rice with a side of the poaching broth, I reserve it to make miến gà. I’ll share with y’all the recipe for that bean thread noodle soup with shredded chicken in a different post. In the meantime, I hope that you enjoy my take on Hainanese chicken rice! 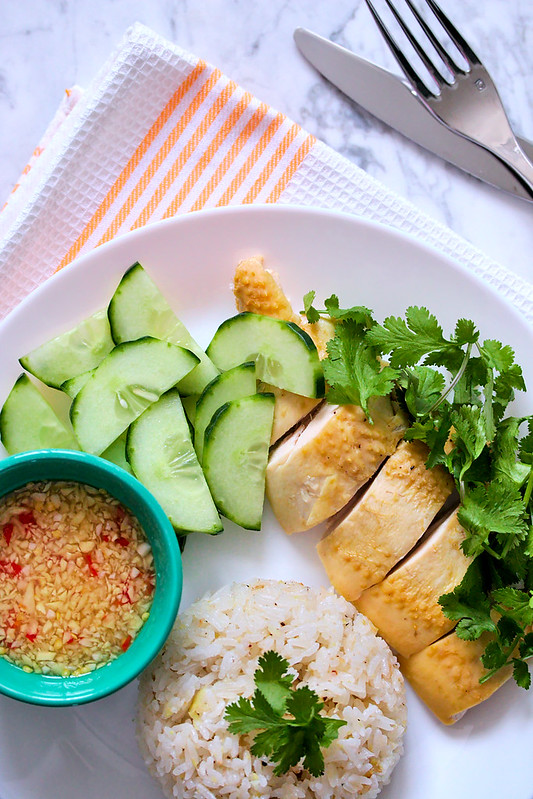 Once cooled, chop the chicken into serving size pieces. Pack a rice bowl with the sautéed rice and invert it over a plate. Assemble the chicken around the rice with sliced cucumbers. Serve with the nước mắm gừng dipping sauce and a small bowl of the chicken broth garnished with chopped cilantro.

*If you don’t have a rice cooker, the rice can also be steamed over the stove. Add the rice and stock to a pot and bring to a boil over medium high heat. Once bubbles start forming at the surface, turn the heat down to low, give the rice a stir and continue cooking for another 15 minutes covered. Once the rice has absorbed all of the poaching broth, remove from heat and allow to sit covered for about 3-5 minutes. Then, fluff the rice with chopsticks as you would after steaming it in a rice cooker. 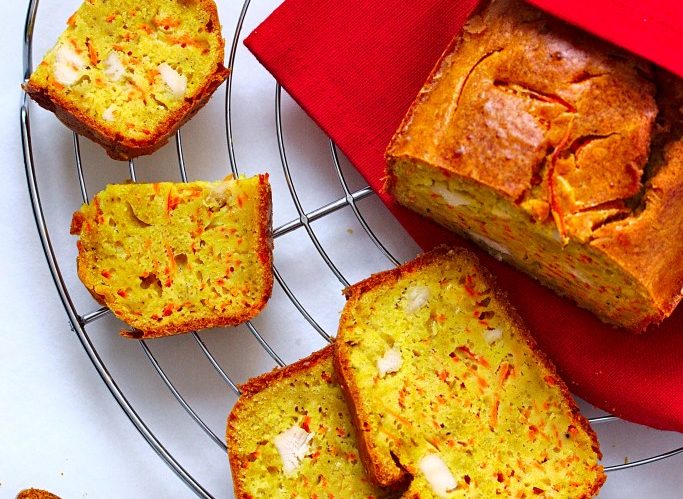 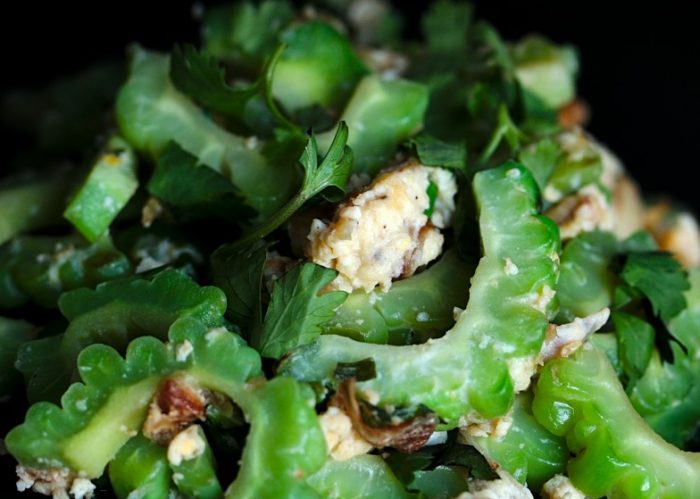 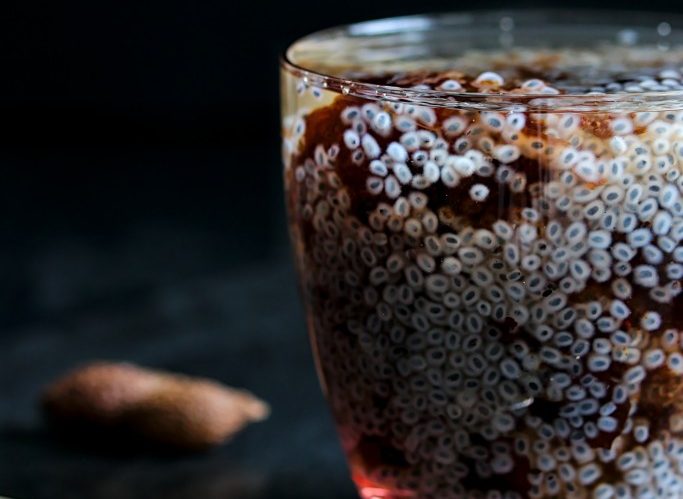 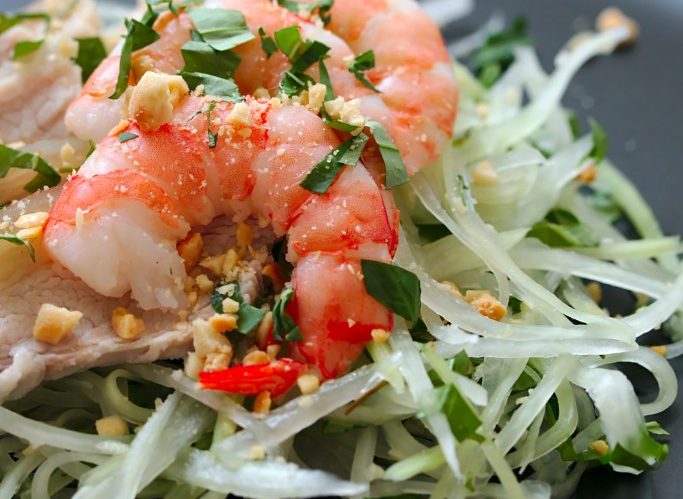 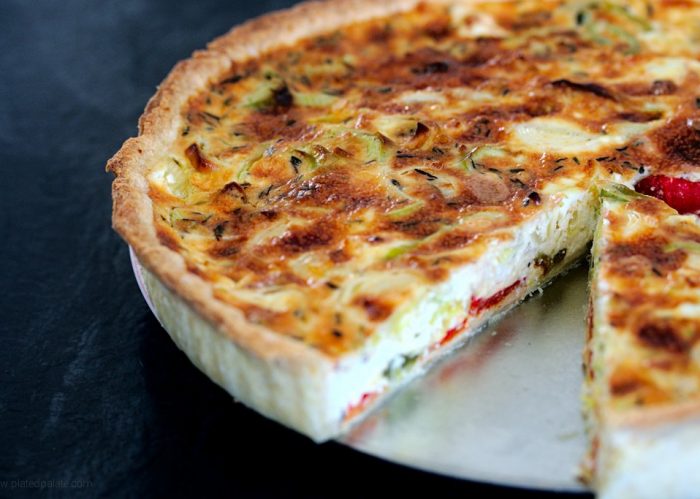 It's been over a year since I've made any food pho

Just when I thought it was time to fold, I was dea

After basking in the California sunshine and spend